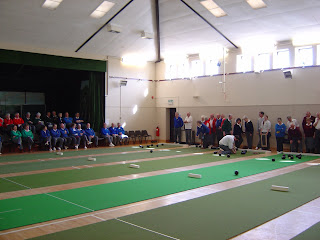 Annual Tournament at Marazion
in aid of the Marazion Committee for Handicapped Children.

On Sunday 30th March 2008 the annual Bowling Tournament, hosted by Marazion Indoor Bowling Club, raised over £1330 for the Marazion Committee for Handicapped Children, who raise funds to help local children with special needs. The sum raised included a generous donation of £360 from Barclays Bank under their staff £ for £ scheme.

Thirty-six teams from all over Cornwall, involving 144 active bowlers, again competed in the tournament which ended with two closely fought semi-finals. R. Gilbert’s team from Porthleven against J. Ramsay’s team from Mabe / Marazion went to an extra end, finishing 9 shots to 8. The other semi-final between J. Bradbury’s team from Wadebridge and D. Mallet’s team from Goldsithney was 5 all going into the last end and finished 6 shots to 5.

The resulting final between Porthleven and Wadebridge was also very close and exciting throughout finishing in a win for Porthleven by 8 shots to 5.

The players and spectators were treated to excellent lunches and continuous refreshments throughout the day, prepared by the committee members. A good raffle helped to boost the funds with prizes being donated by the participating teams and members of the committee.

All in all a most enjoyable day was had by everyone.

A report can also be found on the this is cornwall website
http://www.thisiscornwall.co.uk/displayNode.jsp?nodeId=144143&command=displayContent&sourceNode=144131&contentPK=20359028&moduleName=InternalSearch&formname=sidebarsearch
Posted by Nicholas Truscott at 18:11