With the new season fast approaching competition entries are now closed and the draws will take place at Luxulyan Village Hall on Sunday 6 September at 1400.  All members are welcome to attend. 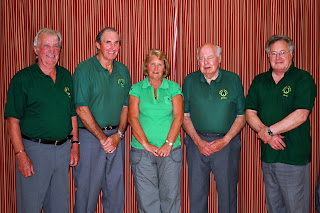 The Cornwall County Short Mat Bowling Association Summer League has come to a conclusion for the 2009 season after the two area winners contested the two leg final this week.

The competition provides competitive opportunities for members during the off season attracted 16 entries from across the county split into two area leagues. The Western area honours were taken by the Withiel Elms and the Eastern area by Tintagel Heralds.

On Tuesday evening (25th August) the two teams met in the first leg at Tintagel with the Elms inflicting the only home defect on the Heralds for the season, coming away with a six shot advantage from a 20-14 win.

On Thursday evening (27th August) it was the turn of the Elms to defend an unbeaten home run in the second leg. The open exchanges of the 21 end match were closely contested with neither team pulling clear and the score at 4-4 after 7 ends. The next two ends saw the Elms edge in front by 3 before the Heralds responded with a score of 2 on end 10. The Elms then scored on the next 7 successive ends, including a 6 on end 12 to move 22-7 in front on the night and 42-21 on aggregate. Tintagel picked up a solitary shot on end 18 to keep a mathematical hope alive but this was extinguished on the following end by a score of 2 by the Elms. A further 5 on end 20 for the Elms stretched the lead further before the Heralds picked up a consolation 3 score on the final end to leave the final score at Withiel Elms 29-10 Tintagel Heralds on the night and 49-24 on aggregate.