The cup is contested by the four Area League champions; the others being Camelford, Liskeard and St Agnes.

The Jowsters had won the West Area with a record tally of 112 points, enjoying being back at their recently renovated home venue "The Centre". 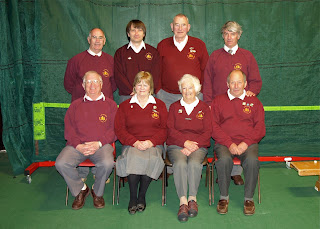 Thanks to Nigel Nicholls for providing the report and photo.
Posted by Nicholas Truscott at 20:31