On Sunday the four area league winners met at Fowey Community Leisure Centre to compete for the Bebbington Cup. 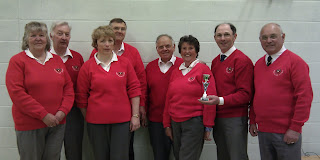 The first session saw Withiel and Dobwalls share the points with a win apiece, 14-11 & 7-15.  Lanteglos claimed maximum points with a pair of wins against Holmans 12-4 & 12-10.  In the second session Holmans were double 18-8 winners against Dobwalls whilst Withiel and Lanteglos recorded a win apiece 4-13 & 12-10 to leave Lanteglos leading on 6 points going into the last session.  Holmans held second place on shot difference from Withiel, both on 4 points with Dobwalls on 2 points.

The final session saw Lanteglos secure the title, picking up 3 points against Dobwalls with an 8-6 win and 9-9 draw. Withiel and Holmans shared the points from there encounters, 11-4 & 9-12 leaving Holmans to claim second on shot difference from Withiel. 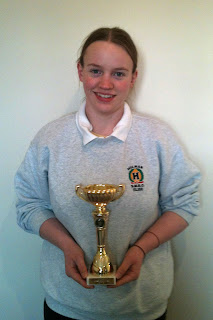 During the afternoon eight of the counties young bowlers competed for the County Under 25’s title.  Group One saw all three of the County Squad members playing (Peter Hore, Elise Daniell and Luke Jolly) drawn to play each other and joined by Alice Grimshaw.  Luke started with an 11-2 win against Alice whilst Peter took a 10-4 win against Elise. The second round of games saw Elise defeat Luke 11-5 and Peter defeat Alice 10-3.  The final group games saw Elise confirm second place in the group with a 9-4 win against Alice and Peter claim the top spot with a 9-3 win against Luke.  The final group scores being Peter 6 pts +19 shots, Elise 4 +5, Luke 2 -3 and Alice 0 -21.

In Group Two Tom Westlake started with a 14-3 win against Sam Turpin-Brooks and Rob Price-Brind recording an 11-2 win against Addison Jolly.  The second round of games saw Tom edge past Addison 7-5 and Rob defeat Sam 11-1.  The final round of games saw Addison claim a consolation win, defeating Sam 14-1 and Tom claimed the group decider defeating Rob 15-5.  The final group scores being Tom 6 +23, Rob 4 +9, Addison 2 +2 and Sam 0 -34.

In the semi finals Peter defeated Rob 14-1 and Elise booked her place in the final with a 7-1 victory over Tom.  In the final Elise settled on the tricky mat better in the early stages opening up a 6-1 lead before a 3 on the penultimate end for Peter brought him back within 2 shots to set up a tense finish. With Elise holding the last bowl to be played Peter lay a match winning count of 3, but Elise held her nerve to push one of Peter's bowls out and fall in off it to take 1 shot and with it her first individual title with a final score of 7-4.

This weekend three bowlers, Peter Hore, Elise Daniell & Nigel Nicholls will travel to Northamptonshire to take part in the England Squad Trials for the 2012/3 season.

The association’s Annual General Meeting will be held on Sunday at Luxulyan Village Hall starting at 1430.

Spring Bring a Friend Week
Registrations for clubs wishing to take part in the Bowls Development Alliance’s Bring a Friend Week, supported by Potters Holidays, are now open! The Spring Bring a Friend week will run from Saturday 28th April until Monday 7th May (May Day Bank Holiday).
Last October, clubs who hosted a Bring a Friend event saw an average of 13 new members in just one day! If your club wants to get involved and host a Bring a Friend event then please register by visiting http://www.bowlsdevelopmentalliance.com/bringafriend/register-bafd or by telephoning the BDA’s Head Office on 01664 484926. Once registered, your club will receive an information pack from the BDA with hints and tips to give your event the best chance of success.
Both the Spring and Autumn Bring a Friend Week’s have been sponsored by Potters Holidays and the details of the prizes, including terms and conditions, will be released shortly so keep watching the BDA’s website – www.bowlsdevelopmentalliance.com – for more information!
Happy registering!
The BDA Team
Posted by CCSMBA News at 18:55 No comments:

On Sunday (15 April) the four area league winners will meet at Fowey Community Leisure Centre to compete for the Bebbington Cup.  Representing the areas will be:

West – Holmans, Central – Withiel Oaks, North – Lanteglos  and East – Dobwalls. Play gets under way at 9.00 and expected to conclude at around 13.00.

On conclusion of the Bebbington Cup the County Under 25’s will be contested at the same venue.

The association’s Annual General Meeting  will be held at Luxulyan Village Hall on Sunday 22 April getting underway at 14.30.

Representatives of the media are invited to attend the finals on Sunday 15 April should they so wish to do so.

Annual Tournament at Marazion in aid of the Marazion Committee for Handicapped Children held on 25th March 2012. 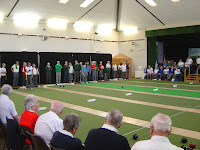 On Sunday 25th March 2012 the annual Short Mat Bowling Tournament, hosted by Marazion Indoor Bowling Club, raised over £1420 for the Marazion Committee for Handicapped Children. The charity raises funds to help local children with special needs.   The sum raised included a generous donation of £360 from Barclays Bank under their matched fund raising scheme supporting staff in their fund raising efforts.

Thirty six teams from all over Cornwall, involving 144 active bowlers, again competed in the tournament which ended with two hard fought semi-finals.  Rob Peareth's team from Lostwithiel beat Carolyn Stanley's team from St.Newlyn East by 10 shots to 5, and Derek Newton's team from Dobwalls beat Ian Perry's team from Porthleven by a close 7 shots to 5.

In the final Lostwithiel got off to a good start and held their lead over Dobwalls to finish winning by 10 shots to 5.
The players and spectators were treated to excellent lunches and continuous refreshments throughout the day, prepared by the committee members. A large raffle helped to boost the funds with prizes being donated by the participating teams and members of the committee.
The Cornwall County S.M.B.A. Chairman Mr. Henry Kendall expressed his thanks to all for their efforts in arranging this tournament and to all those who gave their support by playing  in it.
Everyone had a very enjoyable days bowling.
The Marazion Committee for Handicapped Children raise thousands of pounds every year, and all the proceeds of their efforts are donated to various local projects involving children with special needs.
The Committee would like to thank Barclays Bank for their continued generous donations over several years as part of their community investment programme.  They would also like to thank the Marazion Community Centre, Marazion Indoor Bowling Club and the bowlers themselves for all their help and support of this worthy cause.

The English Short Mat Bowling Association National Championships have been contested over the weekend with Cornwall represented in all four disciplines with six of the eleven representative playing in their first championships.

On Thursday Karen Watson (Treviscoe) competed in the Singles.  In a tough group Karen’s first opponent was Hampshire’s Jason McLean who claimed victory by 17 shots to 7.  Next up Karen faced Derbyshire’s Ian Lunn earning a 9-9 draw.  The final group game resulted in a further draw for, this time 8-8 against West Midlands’ Scott Follis.  This left Karen on 2 points and third place overall missing out on qualification for the knockout stages.

On Friday attention turned to the Pairs with Richard Brown & David Studden (Illogan) competing.  Their first game saw them up face Devon’s Simon Pridham and Lee Tolemen with the Devon pairing taking the game 9-6.  The second game, against Alec Martin & Gavin Wood (East Sussex), again resulted in defeat 5-13.  The final group game resulted in a consolation win for Richard and David, 9-4 against Derbyshire’s Phil & Marnie Wright.  The 2 points were only good enough for third place in the group, missing out on the knock out stages.

In the last 32 Cornwall 1 faced Gloucester 2 (R Wilson, M Wilson, D Wilson & S Holdsworth) falling behind by 4 shots in the opening two ends before scoring 19 unanswered shots to secure victory.  Cornwall conceding a single on the last end to win 19-5 overall.  The last 16 saw Cornwall up against the experienced Cheshire 2 team of Keith Lackford, Martin Walker, Jim Neal & Grant Soller.  The closely contested game saw the score tied at 5-5 going into the last end with Cornwall having the first bowl.   As the end played Cornwall held shot with a bowl on the edge of the mat however Cheshire skip Grant Soller used the last bowl of the match to tip the Cornwall bowl of the side of the mat leaving Cheshire holding the game winning shot.

There is a break in competitive action locally over the Easter Weekend before the final competitions of the season, the Bebbington Cup (League Finals) and County Under 25’s, are played on Sunday 15 April at Fowey Community Leisure Centre.