Easter at Mabe Short Mat, with one of it’s younger members being diagnosed with a form of Parkinson recently the Club Captain of Mabe Short Mat Bowls Club, Frances Walther decided to arrange a charity fundraiser for the Parkinson Society.

Easter Saturday being early this year gave an opportunity for bowlers from across the Cornwall to visit Mabe, many for the first time, to play in this daylong event.

Games were played all day on two mats, to give two finalists who played the final on a relocated mat at the end of the day. The winning team were, Norman & Joyce Ward from Withiel and George Falconbridge & Joyce Price from Mabe. The runners-up were Roy Christophers, Rose Smith, Henry Stephens & Dave Studden.

Tea, coffee and biscuits were supplied all day by club members, with a Rowe’s Pasty and Hot Cross Bun at lunch time for all attending. In total during the day the Club with mat fees and a raffle the club raised a total of £258 for the Parkinson Society. At the end the day Frances Walther presented the bag of money to Bryn Davis of the Parkinson Society who attended to present the prises. He was so impressed by the friendly but competitive nature of the matches that he has asked if it would be possibly for some of their members to have a go later in the year. 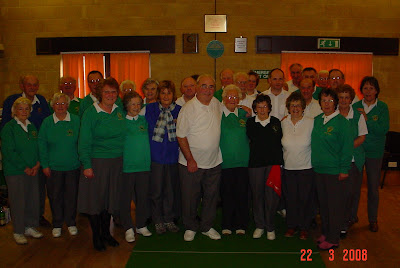