On Saturday 3rd August, the annual Tony Watson's Trophy charity Short Mat Bowls Competition was held at St. Minver SMBC. It was the third time that the event had been held in memory of Tony Watson, who passed away in August 2010, and the aim was to raise money for Macmillan Cancer Support, who helped Tony through the last few months of his life.


There was a great turn out of teams, some travelling from as far as Sidbury in Devon to play, with countless teams continuing their support of the charity competition.

During the group stages, three teams successfully won all of their games producing a tense moment as shot differences were calculated and finalised. Therefore, although Treviscoe played admirably they, unfortunately, did not qualify due to shot difference.  The final became a well anticipated game as Withiel qualified with 6 points plus 36 shots and Hotshots proceeded to the final with 6 point plus 30 shots.

This made for a tense final game with many onlookers staying to observe the outcome. The final was a great game with the score being 8-9 on the penultimate end to the Hot Shots. The pressure was then on Withiel to pull it back on the final end despite their early lead in the first six ends. Elise Daniell and Neil Gribble built a good head leaving Nick Truscott and Peter Hore very little to do; they had the jack surrounded and it proved very difficult for skip Ken Horrell to save the day.  This saw The Hot Shots picking up a further two shots on the last end making the final score 8 – 11 to The Hot Shots. A thrilling final for a fantastic day.


Overall, throughout the day, £740.00 was raised for the Macmillan Cancer Support, making it the third, very successful year in a row. 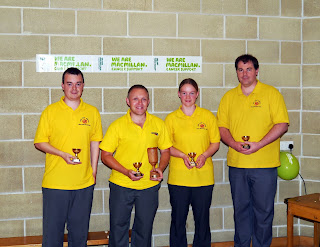 The day was a great success, everyone had a brilliant time and ultimately lots of money was raised for Macmillan Cancer Support.  The Watson family would like to thank everyone for their participation and making the day enjoyable for all involved.  Also thanks to St. Minver School, St. Minver SMBC, Looe Lions, Egloshayle Rainbows, Sharps Brewery, Eden Project, Crealy, Sainsburys and Tesco for their generosity with this event.