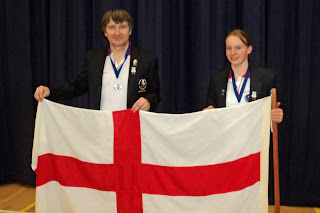 Over the weekend Elise Daniell (Holmans) and Nigel Nicholls (Newlyn Trinity) were part of the England Team at the British Isles A Team Championships in Dumfries, both making there first International appearances.  Elise was also given the honour of carrying the team flag during the opening ceremony.

Treviscoe claimed the Central Area title last week with 2 out of a possible 6 points against nearest rivals Ladock Chiefs.  In the West Area Illogan have now completed there fixtures and hold a 4 point advantage over second place Newlyn Trinity who are away to fourth placed Holmans on Thursday night and Helston Grylls who are home to Penlee.

The CCSMBA welcomes members of the local media to any of our events at Carnmoggas Indoor Bowling Club, for more information please contact me using the details below.