On Sunday Cornwall hosted Dorset at Carnmoggas Indoor Bowling Club for the fifth of this years six Inter County Championship group stage fixtures.  Team Manager Nigel Nicholls asked the Premier Team for a big result and they duly delivered with a comprehensive 31-9 victory.

Cornwall took three wins in the first session, one in the Singles and two in the Pairs including a dominant win for Elise Daniell and Luke Jolly 24-4.  The second session saw Cornwall again take three wins, two in the Triples and one in the Fours.  At the halfway stage Cornwall lead 12 points to 4 and 106 shots to 72.

In the days other match Somerset defeated Devon 25-15 at Taunton Deane Indoor Bowling Club to see Cornwall move into the top spot and setting up a final deciding day of fixtures on the 30th November when Cornwall travel to Dorset and Devon host Somerset with all combinations of top two finishers being possible.  Having taken such a comprehensive victory Cornwall go into the match with a realistic chance of topping the South West group whilst 11 points will see Cornwall guaranteed a top two finish.

Cornwall's A Team finally claimed a win this season with a hard fought 24-16 victory of Dorset.

Cornwall took three win in the first session winning both Singles and one of the Pairs games.  A further three wins followed in the second session with one in the Triples and a pair of impressive wins in the Fours.  Graham Luke, Sandra Worton, Keith Matthews and Brian Wakeley 22-5 and Henry Matthews, Bill Sharp, Brenda Sleep and Derek Newton 18-0.  Cornwall lead 12 points to 4 and 110 shots to 65 at the halfway stage.

Three wins for Cornwall in the third session, both Singles completing doubles on the day and one win the the Pairs together with the Singles bonus points moved Cornwall onto 20 points ensuring that the losing streak for the season was broken.  Dorset rallied in the final session taking three wins to Cornwall's one which came in the Fours also securing the Fours bonus points.  The final match score Cornwall 24 points Dorset 16 and Cornwall 178 shots Dorset 156.  Somerset won the days other match 22-18 ensuring that Devon and Somerset secure the two spots in the Main Knockout Competition with Dorset and Cornwall in the Consolation places.

The local qualification competitions for the National Pairs and Triples were contested recently.  In the Pairs Elise Daniell and Nicholas Truscott needed an extra end to defeat Gillian Cawrse and Nigel Nicholls in a tense final, winning 9-8.  Top spot in the Triples went to Truscott, Nicholls and Peter Hore ahead of Dennis Shorthouse, Neil Gribble and Ed Dyer. 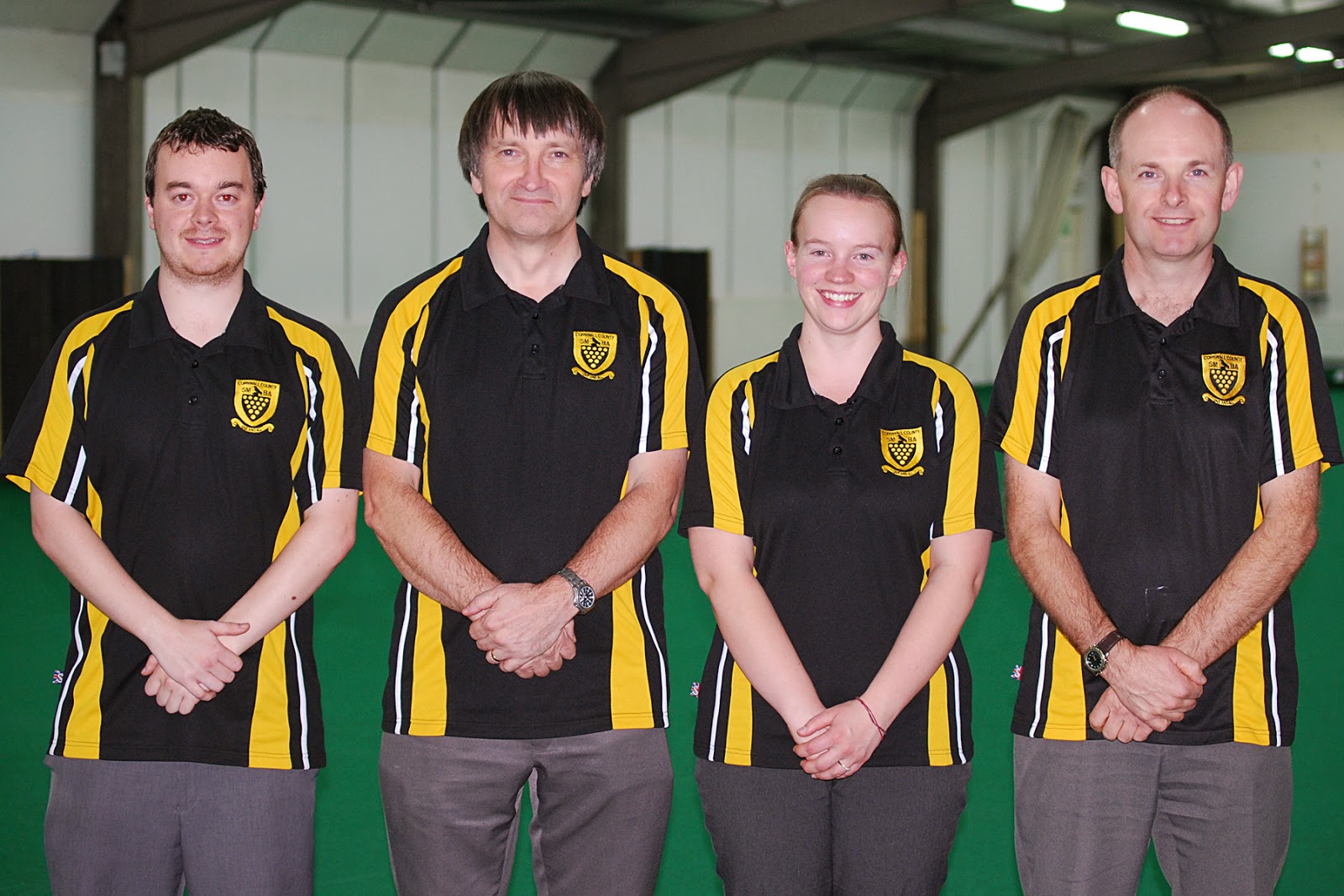 Peter Hore and Nigel Nicholls take part in the British Isles Short Mat Bowls Championships in LLanneli, Wales this weekend.  Peter will take his place at number three alongside Mitchell Young (Essex), Ryan Knight (Gloucestershire) and AJ Brown (Oxfordshire) who also played with Peter when he last played in the championships in 2012.  Nigel Nicholls, making his debut in the senior team after previously playing in the A Team in 2013, will line up as lead in a rink including Jack Knight (Gloucestershire), Keith Hawkins (Somerset) and skipped by Dave Wiggins (Oxfordshire).

The full teams for the Championships have been published by the ESMBA and are as follows.

Locally the Inter Area League fixtures between North v West and Central v East will be played at Carnmoggas on Sunday with play starting at 10.00.

The local leagues are now well underway with the early front runners emerging in each area.  In the West Penlee lead Helston Grylls and Holmans.  The Central area is headed by Ladock Braves from Treviscoe Blues and Ladock Chiefs.  East area is lead by Landrake ahead of Callington Eagles and Dobwalls.  Blisland head the North from Lanteglos and Poughill.