On Sunday (14 April) the last competitive action of the season took place at Carnmoggas Indoor Bowling Club with the Bebbington Cup and Under 25's contested.

First up was the Bebbington Cup where the four area league winners from across the county come together to determine the overall county league champions.

In the first round of games Treviscoe Whites (Central Area) and Callington Eagles (East Area) shared the points on offer with scores of 8-11 and 11-10.  Illogan (West Area) claimed maximum points against last years champions Lanteglos A (North) with scores of 10-7 and 11-9.

The second round of games saw Illogan comfortably take maximum points off Callington with scores of 13-2 and 17-3.  Treviscoe took three out of four points against Lanteglos with scores of 15-11 and 8-8.

In the final round of games Callington claimed maximum points against Lanteglos with scores of 9-7 and 12-3.  In the title deciding match up between Illogan and Treviscoe in was the West area team who claimed the advantage taking three points with scores of 14-6 and 7-7.

Upon conclusion of the Bebbington Cup 5 of the counties youngest bowlers contested the County Under 25's title.  With a small entry all bowlers played each other in a league format to determine the winner. 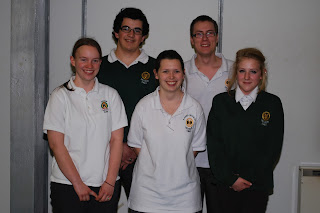 Next weekend a group of bowlers, (Peter Hore, Elise Daniell, Nigel Nicholls, Neil Gribble, Ken Horrell and Chris Roberts), travel to Torquay for the ESMBA/Torquay Leisure Hotels Top Club Championship up against 15 other teams from around the Country.

The following weekend will see the County AGM held at Luxulyan Village Hall on Sunday 28th starting at 1430.

Over the weekend of the 11th and 12th May, Cornwall's National Championship Fours Runners Up Elise Daniell, Nicholas Truscott, Nigel Nicholls and Peter Hore travel to Bere Regis to compete in the Dorset Open Pairs and Fours.  The Pairs, a new competition this year will be played on the Saturday.  The Fours, in which they reached the semi final last year will be played on the Sunday.